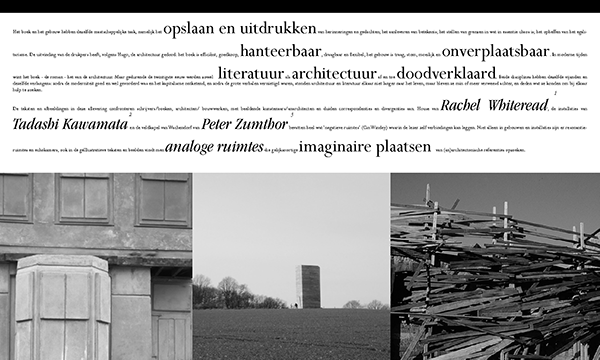 “the Artists in their Own Words”
(School project)

For this assignment we had to make an addendum to go with the gagarin-magazine. The extra “book” had to have the given texts placed in creatively in accordance to their content; contain one given picture of a work made by the three given artists (Peter Zumthor, Tadashi Kawamata & Rachel Whiteread) & lastly an own interpretation of each of the artist’s work.
For “Die Feldkapelle” by Peter Zumthor, i made rubbings of wood structures, referring to the inside texture of the artwork. Tadashi Kawabata works with wooden beams & planks to make his sculptures, i tried my own hand at it with wood shavings. Rachel Whiteread, lastly, works with negative spaces; for this interpretation i made a linocut which is also a negative cut of the image.

Originally these pages where made in to a genuine booklet, but after consulting my instructor, i decided to make A2 posters out these, as they worked beter with the lay-out.

GAGARIN
“Gagarin is a recent artist’s magazine (°2000), entirely dedicated to the publication of especially written and unpublished texts by artists who are now working, anywhere in the world. Each issue contains a number of artists’ writings, if possible from an equal number of countries. The texts are published in their original language and alphabetical writing, with unabridged translations in English added.”
“GAGARIN also aspires to provide an accurate source of information about the collaborating artists, using their ownwords.”
http://www.gagarin.be